Welcome Welcome to Boyd Holbrook Updates, fansite dedicated to American actor Boyd Holbrook. Here you will find the latest news related to Boyd and his career, as well as tons of images on our photo gallery. Enjoy your stay!
The Film Experience (2016) 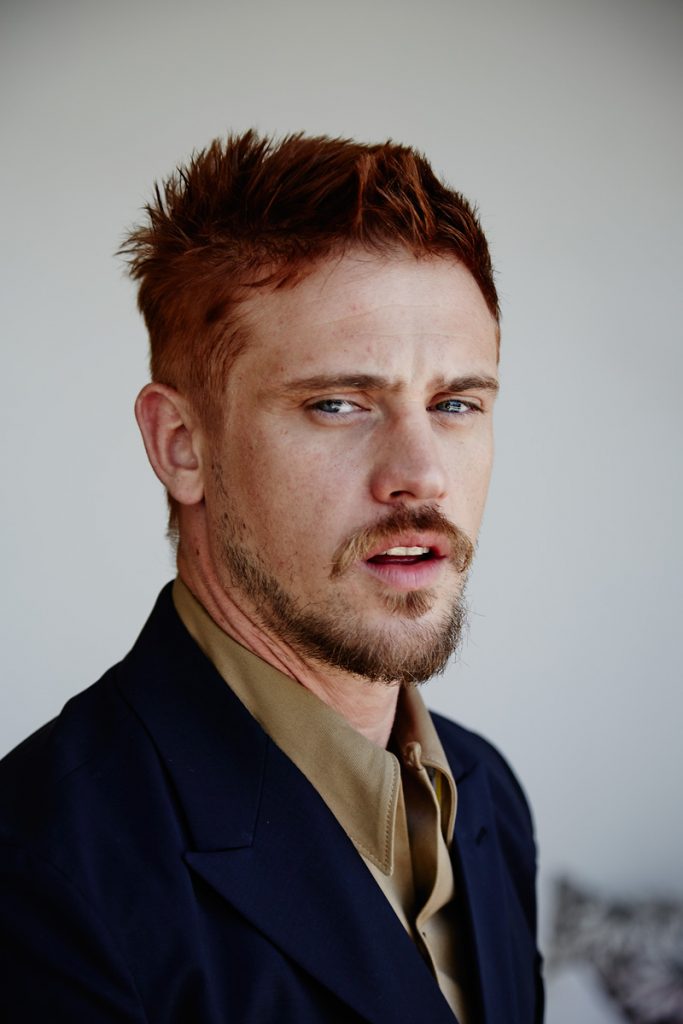 I regret to inform you that I cannot begin this story with the sizzling lede I’d intended. But the redacted story, of where Boyd Holbrook called me from and the new project he’s working on — were nevertheless a good reminder that he’s been an exciting talent to watch. That’s not just because he’s so engaging onscreen but because he doesn’t want to get stuck in a rut; it’s hard to guess where his creative muse will take him next.

So let’s jump to our real topic. Boyd Holbrook was calling to discuss his role as DEA officer Steve Murphy in the Netflix series Narcos. The debut season was nominated for Best Drama Series at the Golden Globes and before its second season airs, it’s undoubtedly hoping for Emmy to follow suit (balloting closes tomorrow). The story revolves around the drug lord Pablo Escobar (Wagner Moura, Globe nominated for Best Actor) and the attempts of DEA agents Steve Murphy (Boyd Holbrook) and Javier Peña (Pedro Pascal) to bring him down. Though it’s somewhat of a three-lead series, Holbrook and Peña are both on Emmy’s Supporting Actor Drama ballot since Escobar is the subject matter. Holbrook’s character is our window to the story and a handy historical reference guide as narrator. The early episodes have to impart a ton of information we couldn’t be expected to know about both Colombia and the US in the late 70s and early 80s as well as technological limitations of the time in hunting and surveillance of your prey.

I talked to Boyd about the peculiar demands of the part, half-exposition and half-character work, but we begin with what I suspect is his multi-hyphenate inner artist.

NATHANIEL R: Your career is a bit hard to pin down. You’ve dabbled in so many things already: poetry, sculpting, writing, producing, and, of course, you started as a model. Is this because you’re a restless creative spirit or was acting always the end goal?

NATHANIEL R: But that’s true of acting, too. So did acting just happen or…

BOYD HOLBROOK: I was working at a theater company and wanted to become a writer and director in New York but I had no money. I did want to be an actor but I thought I was way too much of a hilbilly to do that. Someone asked me if I wanted to go to New York for a modelling job and I just never left. It was kind of a segueway, a way to get to New York. From there I did my thing.

A lot of your roles have you in a moustache and/or locked in the 1970s on camera — Beyond the Candelabra, Higher Ground, Milk, Narcos…

However Narcos is in the 80s — not to be a douche!

…[Thinking] I’m very attracted to characters that are foreign to me. I’m actually shy of my own personal life and quite more interested in other people. That has something to do with it, the curiousity. Whether I’m playing heterosexual, homosexual, Australian…

Playing a real person this time in Narcos, did you think it was more important to think of Murphy as a dramatic construction or honor the actual person?

There was a tremendous amount of pressure when I first read it. I’ve never truly played a real person. Maybe it was just me but there was this initial anxiety of ‘Oh, I have to mimic this person!’ like a very famous person. But with Steve, no one really knew who he was. He’s from West Virginia but I had this element of the the voicever for 10 hours so I didn’t want to have such a strong accent. That could be annoying after a while. After I met Steve and got familiar with the project, you do have to take creative license because of the narrative, because of the story.

One of the things that’s immediately evident since you speak to us well before we see you, is that as the narrator, you’re giving two performances. Half of it, I assume, is in a soundbooth alone.

It’s exhausting. For me, I looked at it. It’s 10 hours of voiceover [Narcos’s first season has 10 episodes – editor]. The show has been compared to Goodfellas but if you listen to the voiceover of Goodfellas, it’s very intense. For 10 hours I don’t know if you can handle that since it’s so in-your-face. Unless you’re bilingual than you’re reading subtitles so I didn’t want to make the audience work more to digest something that was maybe too theatrical. So what I tried to do was something more hypnotic. I mean this with the utmost repect but someone like Matthew McConaughey or someone [Adopts Texas accent than switches to Australian to demonstrate -ed.] with an identifiable voice. But if you have to listen to a heavy accent, It’s just…

Oh, dude. How many hours I’ve spent wrapping my head around this shit.

Let’s talk filming. Most of your scenes are with Pedro Pascal.

[Laughs]. What’s the mood like on set? I assume it’s different than what comes across on screen since it’s so intense.

First, I have to tip my hat to Jose Padilha [producer/director] and Wagner. This show could have been done for probably a lot cheaper in Puerto Rico or it could have been done in English with a Spanish lisp like some sort of bad World War II movie. So those choices were made up front. We’re on location in Medellin. We’re on location at Pablo’s house. There are no sets, no anything. It’s a great luxury to have all that do the work for you.

…so does that mean you’re not worrying about creating the reality but just enjoying yourself as an actor?

Oh yeah! For me, I love preparation. We went to Quantico. I got Steve to get us into Quantico for a week. I trained with the DEA — they’re there for 18 weeks but I got a very good glimpse. That glimpse changed my whole perception of the character. I got my brains blown out in a scenario with a live gun that shot blanks but it fired the same sound as a real gun. It changed my perspective. After a while, if you do enough preparation, then you’re sort of just existing. And if you’re existing with the luxury of the actual locations, even better.

The aesthetic of our show is hyper realism. It’s not the camera work where ‘we’re going to do coverage, then we’re going to wide angle, then over your shoulder’ — No! It’s balls-to-the-wall who knows what’s going to happen. It’s by far the hardest thing I’ve ever done. I was there for 18 months out of 2 years.

Your character on Narcos does not speak Spanish and that creates conflict but did you learn Spanish since you were there for so long?

I speak very bad Spanish! I can get around but I can’t have a proper conversation.

The stuff we’ve seen you in before Narcos, you’ve often had kind of showy fun little parts like in Gone Girl and Skeleton Twins. After this big role in a Netflix show, you have Wolverine coming up where you’ll play the villain. Do you see Narcos as opening doors for your career in that way?

As an actor trying to make a living, you have to take work. But there’s also integrity to any artist in any medium — you have to be satisfied and not get knuckled down into some situation. I’ve very specifically, with my team, chosen to do small parts with good material. You talk about ‘flashy’ characters. That’s my work but I can’t do that without good written material. And on top of that I’d prefer to work with great people in a smaller capacity rather than, you know, Twilight or something like that.

So that will stay true moving forward, regardless of the size of part?

Absolutely. I have no vanity to be the star. I shaved a receding hairline just for the character. I have a production company, I develope material. The material is what I’m drawn to.