Welcome Welcome to Boyd Holbrook Updates, fansite dedicated to American actor Boyd Holbrook. Here you will find the latest news related to Boyd and his career, as well as tons of images on our photo gallery. Enjoy your stay!
New York Post Alexa (2018)

Before stardom, Boyd Holbrook was ‘just a hillbilly from Kentucky’ 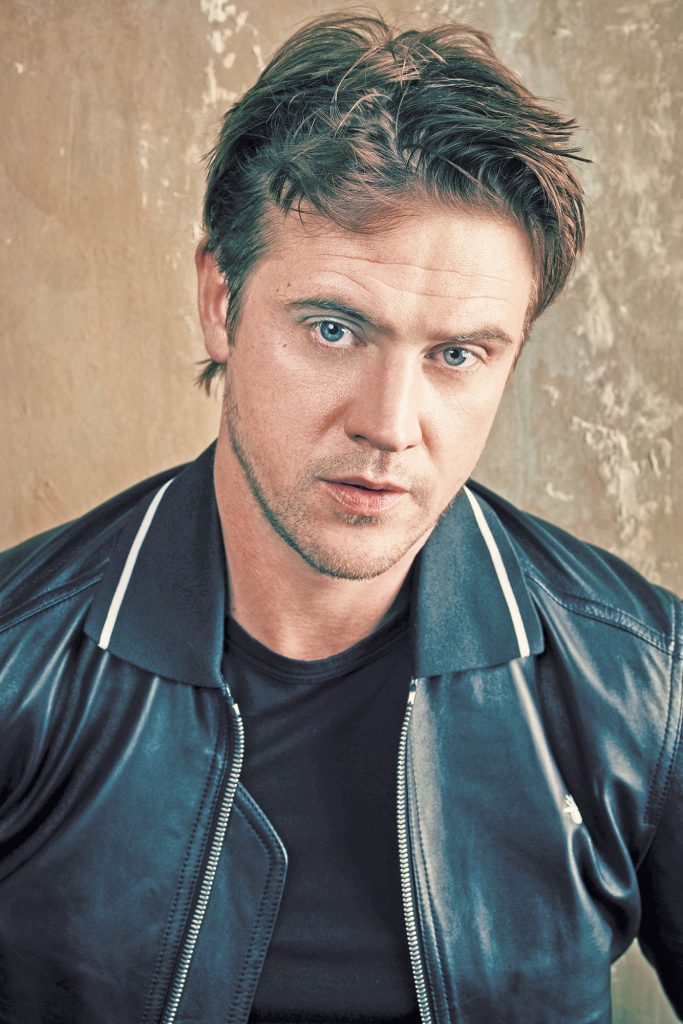 You can never quite predict the impact of a chance encounter. Just ask Boyd Holbrook, new hero of “The Predator” — the latest installment of that blockbuster extraterrestrial franchise.

Holbrook says he may have never left the coal-mining town of Prestonsburg, Ky., for the Hollywood limelight if he hadn’t bumped into actor Michael Shannon at a department store in Lexington. “I was working at the store when Michael Shannon came in,” Holbrook recalls. “I recognized him from ‘Vanilla Sky’ and I asked him, ‘How do you do what you do?’ He told me to get into theater.

“It was very serendipitous,” Holbrook, 37, says of the happy accidents that have shaped his career — and brought him to an airy wine bar on the waterfront of Greenpoint, Brooklyn, to chat with Alexa. “I am just a hillbilly from Eastern Kentucky.”

Or a lanky fashion-model-turned-action-hunk, who’s rapidly becoming a fixture of major releases, from the 2014 psychological thriller “Gone Girl” to last year’s hard-hitting X-Men film “Logan.” On the small screen, the actor has enjoyed arguably even more success, starring as DEA agent Stephen Murphy on Netflix’s hit series “Narcos.” He also just wrapped filming on his next Netflix project, “In the Shadow of the Moon” — a gut-punching, mind-bending murder mystery told in nine-year chapters. (We’ll see him age in the thriller with the help of “The Shape of Water’s” talented makeup team.)

More importantly, Holbrook says, he and his wife — Danish actress and model Tatiana Pajkovic — are new parents to their 8-month-old son, Day (named for “daylight — because he is bright”). “I have a beautiful wife and a beautiful baby boy, who is the center of my life,” he says. The family lives in a converted pole barn on 10 acres in Bovina, NY, but also keeps an apartment in Williamsburg, Brooklyn. “Fatherhood is the greatest opportunity I’ve ever had in my life.”

As for his own childhood, he says he was a discontented, quiet and uncultured kid with a heavy Appalachian drawl. He “spent every waking hour” at his great-grandmother’s house while his father worked in a mine. After her death, Holbrook dreamed of escaping his blip of a town along Route 23, aka “The Country Music Highway.”

When it became clear that a basketball scholarship wasn’t his ticket out (“Turns out I wasn’t very good,” Holbrook laughs), he latched onto another long shot: slam poetry. Inspired by a scene in the 1998 independent film “Slam,” Holbrook began to write his own verse and to think seriously about performance.

“Being from Eastern Kentucky, you’ve got Loretta Lynn and Dwight Yoakam and a lot of famous country-music people,” he says. “But I was into Def Jam. There was something about the ‘burst’ [of slam poetry] that I found just so goddamn sexy, exciting and intelligent.”

After his encounter with Shannon, Holbrook quit his job at the department store and got a part-time gig building sets at a local theater company through his sister (who’s now a social worker). He wasn’t long on the job before another bit of almost unbelievable good fortune came his way.

“Somebody said, ‘Hey, let me take your picture. I’m going to submit you to be a model,’ Holbrook recalls of his improbable encounter with a scout. “To be square, I didn’t even know what ‘model’ meant. I had no idea. I was like, ‘Whatever.’ A month or two later, I was just about 21 and had a free flight to New York. My cousin lived in Hoboken and I lived on her couch for a month. I had $1,100 and I made that last eight months by working at a coffee shop in Union Square.”

But soon Holbrook was posing for the fashion industry’s top designers, including Gucci, Jean Paul Gaultier, Hugo Boss, Calvin Klein and Marc Jacobs. “I was string-bean skinny and starving,” he says. “But I was the talk of the town.”

Although he had only left the state of Kentucky about three times before moving to New York, he was suddenly flying around the world for shoots and spending extended periods of time in Paris.

“It’s a very weird industry,” he says, adding that today he shuns designer looks for a uniform style, paired with his collection of seven custom hats and the 1973 Rolex he had delivered to Alexa’s cover shoot. “I could relate to the stereotypical Eastern European girl coming from nothing. Now you are in a big city, making money and you don’t want to go back to your former lifestyle. But if you don’t educate yourself by the time you are 30, you aren’t going to have a pot to piss in or a window to throw it out of. I saw it [coming].” Once again, Holbrook says he had an almost miraculous break.

5 to attend film school at NYU and study the Meisner technique with Brooklyn-based guru Terry Knickerbocker (his acting coach to this day), Holbrook sent a script he’d written to indie directors Larry Clark and Gus Van Sant. Clark toyed with directing the feature (it was never made), while Van Sant offered him a role in his film “Milk.”

“It was a ‘Where’s Waldo?’ part,” Holbrook says. “I was a glorified background character. But I gave my first line to Sean Penn. I got to cut my teeth with the best of the best.”

With perseverance and training, the roles kept coming. Once limited by his Southern accent, two years of dialect lessons have given him the range to leap from Middle American to a very passable Australian accent (also thanks to some coaching from his friend Sia).

And after working with a Navy SEAL-turned-stuntman, Holbrook went from lean fashion model to leading man. “We were up at 4 a.m., running on the beach in Santa Monica, swimming in ice-cold water,” Holbrook says of training for his “Predator” character, Quinn McKenna, a mercenary soldier. “I was getting used to s – – t that you aren’t meant to be used to. I don’t think I ever passed any of the challenges, but I can’t imagine showing up on set and trying to wing it. That would be a disaster.”

Still, Holbrook says that he has no interest in being typecast as an Action Jackson. “Christian Bale said something that makes a lot of sense: ‘Play something foreign,’” Holbrook says. “It’s an escape. I don’t want to be myself. I don’t know why. That’s a deep philosophical question.”

He hopes to use his high-paying roles in mainstream films to fund projects that have real meaning in a world on the brink of environmental disaster. The star is actively producing and acting in his own films, including an ecological thriller for Fox titled “The Thirst,” a Nellie Bly biopic and the HBO drama “O.G.,” which was filmed on location in a maximum-security prison.

“My job uses me,” he says. “It exhausts me. It’s very taxing. So I am going to use it. I am not going to make a stupid horror film that doesn’t have any social significance. I am going to make stuff that is challenging and progresses a collective consciousness. That’s what’s up.”

“I think you need to take responsibility in life,” he says. “At first you just want to get the fundamentals right and have this lucid drug high through performing. Then you grow out of that and you need to take control.”