Welcome Welcome to Boyd Holbrook Updates, fansite dedicated to American actor Boyd Holbrook. Here you will find the latest news related to Boyd and his career, as well as tons of images on our photo gallery. Enjoy your stay!
Mr Porter (2016) 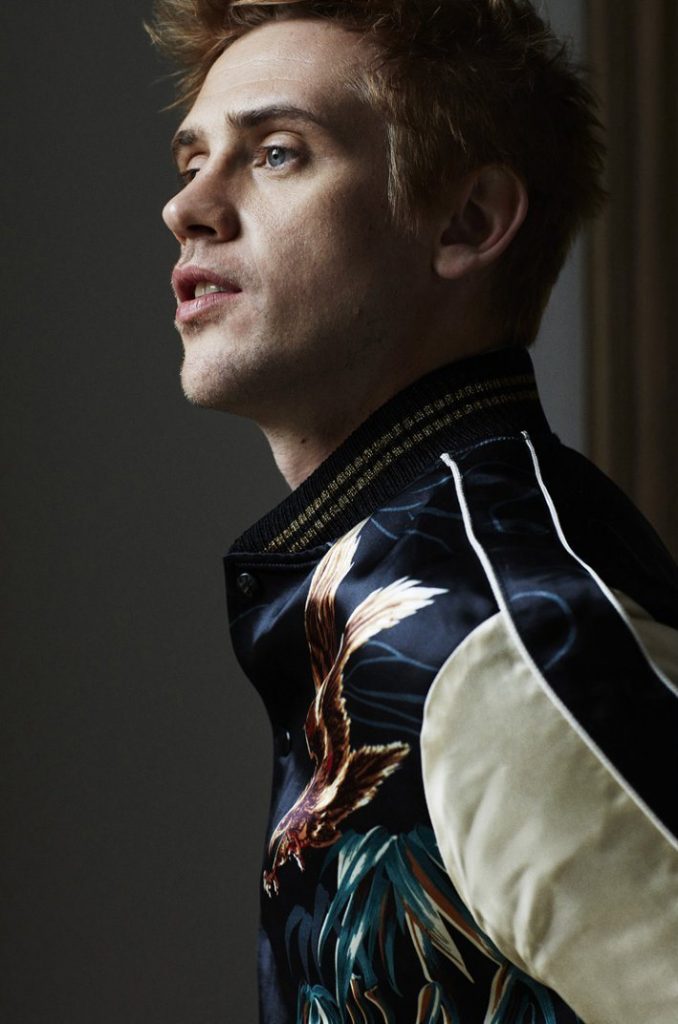 We raise a (plastic) glass with the Kentucky-born actor and star of Narcos.

Mr Boyd Holbrook has earned himself a drink. It’s the Sunday before Christmas and he has just finished posing for his final photoshoot – and job – of the year. Only problem is, there’s nowhere in this quiet little corner of Barcelona to find one. So we’re sitting on the steps outside our location house with a pack of duty-free cigarettes purloined from the photographer, a bottle of cheap but robust vino tinto and a couple of plastic cups. To borrow an in-house phrase, “it’s not very MR PORTER”. Luckily, he doesn’t seem to mind.

It’s the middle of the afternoon and the streets are eerily empty. As we sit there shooting the breeze, enjoying our low-budget, impromptu wrap party, there’s a sense of a slow unfurling, a curtain softly falling on the city as its residents take a deep, collective breath and savour the final few days of 2015. For Mr Holbrook, who stars in the Netflix sleeper hit Narcos and is soon to appear alongside Ms Natalie Portman in the long-awaited western Jane Got A Gun, it’s a rare moment of calm – and a chance to reflect on what was possibly the busiest, and certainly the most exhausting, year of his life.

It needed to be. The previous year, 2014, was marked by tragedy after his good friend, the fashion photographer Mr David Armstrong, succumbed to liver cancer at the age of 60. Back in the early days of his modelling career, Mr Holbrook had acted as one of his muses. And such was the closeness of their friendship that Mr Holbrook was even called upon to write the introduction to his monograph of portraits, 615 Jefferson Avenue, in which he touchingly referred to the photographer as a “bony-assed old queen”. He’s still shaken by the loss even now. Then, to add insult to injury, there was the breakdown of his relationship with Ms Elizabeth Olsen, whom he met on the set of 2013’s Very Good Girls and is said to have called off their six-month engagement over the phone on the very same day that he learned of Mr Armstrong’s death.

“After all that, man, I just wanted to work,” he says, gazing across the street and tapping ash into his empty cup. “I was like, let’s do it. You and me. Let’s go. Let’s head-butt.” Combative language, sure, but the message is clear as day. Mr Holbrook wanted to take 2015 head-on. To make an impact. To leave it reeling. By that measure, at least, he has been successful.

That’s mostly thanks to Narcos, the Golden Globe-nominated retelling of the rise and fall of the notorious Colombian drug lord Mr Pablo Escobar. Mr Holbrook plays Steve Murphy, the American Drug Enforcement Administration agent through whose eyes – and voice – the story is told. “That show blew up, like, 100 per cent more than I was expecting,” he says, though in hindsight the success of a TV series that mixes drugs, violence and a true life story that’s stranger than fiction was all but unpredictable.

“I mean, you couldn’t make a lot of this shit up,” he laughs. “At one point [Escobar’s] Medellín Cartel were making so much money that they didn’t know what to do with it, so they came up with the bright idea of digging holes in the ground and burying it. They buried, like, $27m in cash, but they didn’t wrap it up properly, so when they came back to retrieve the money, it had all just decomposed.”

Even if Narcos was more successful than Mr Holbrook had expected, this self-confessed “blue-collar guy from hillbilly Appalachia” isn’t one to put too much faith in fate and good fortune. “I’m a strong believer in the power of repetition,” he says. “And in failure, too. I’ve failed so many times.” Asked if he considers himself ambitious, he replies yes – but not in a cocky way. “More a naïve, dumb sort of way,” he laughs. “I have this image of myself as kinda like the Energizer Bunny. I get knocked down and I pop right back up.”

You’d expect any successful career – especially one in the notoriously fickle world of acting – to hinge on a few lucky breaks, and Mr Holbrook’s is no exception. Where to start? There was that chance encounter with the actor and fellow Kentuckian Mr Michael Shannon, who offered him some invaluable early career advice and told him to find some work, any work, at a theatre. Then, while working at a local theatre on Mr Shannon’s advice, there was that moment when a woman approached him to ask if he’d ever considered modelling, thus launching his career as an international fashion model for the likes of Mr Hedi Slimane at Dior Homme.

But it’s what happens in between that really counts, and for every lucky break there has been a moment when Mr Holbrook has wrested control of his own destiny. When he was still in his early twenties, for instance, he sent a script to one of his favourite directors, Mr Gus Van Sant, naïvely assuming that he’d want to direct it himself. Don’t ask, don’t get, right? And while it didn’t quite come off the way that he’d hoped, he was later rewarded for his effort with a small part in the director’s Oscar-winning movie Milk. “I was like Where’s Waldo [Wally] in that movie,” he laughs. “But I got to deliver my first, on-screen line to Sean Penn himself.”

(This interview, we should note, took place before Rolling Stone published Mr Penn’s controversial interview with the fugitive Mexican drug lord Mr Joaquin “El Chapo” Guzman, so that obvious line of questioning wasn’t available to us at the time.)

Naturally, he cites Mr Penn as one of his biggest influences, along with Messrs Liam Neeson and Christian Bale – two other actors he has worked with and who, he says, have vouched for him along the way. It was Mr Bale who alerted him to an as yet unnamed project from the visionary director Mr Terrence Malick, which is set to be released later this year. “Christian, he done me a solid,” he says. “I appreciate that. I look up to him a lot. He’s another blue-collar guy, like me.”

That term, “blue collar”, comes up again and again over the course of the interview. At one point, Mr Holbrook even describes a film set as being like a construction site and acting as a trade – “no different from being a plumber or an electrician”. His good looks aside – even at 34, you can still see in his face brief glimpses of that ephemeral beauty that caught the eye of his late friend Mr Armstrong more than a decade ago – there’s something resolutely, refreshingly unglamorous about Mr Holbrook. Something that suggests he cannot, will not, be polished, pruned, perfected.

You can see it in that shock of messy, dirty-blond hair that sticks up every which way, or in the homemade stick-and-pin tattoo spelling out the name “EDITH” on his wrist (I’m assured that it’s the name of his great-grandmother). You can see it, too, in how happily he sits here on the street in Barcelona, one of 2015’s breakout stars drinking cheap red from a plastic cup and toasting the end of a long year with somebody he has only just met. It’s too bad we can’t stay here a little longer, really. But it’s three days before Christmas, and it’s a long way back to Kentucky.