Welcome Welcome to Boyd Holbrook Updates, fansite dedicated to American actor Boyd Holbrook. Here you will find the latest news related to Boyd and his career, as well as tons of images on our photo gallery. Enjoy your stay!
DuJour (2017)

Why Boyd Holbrook is Not Your Typical Bad Guy 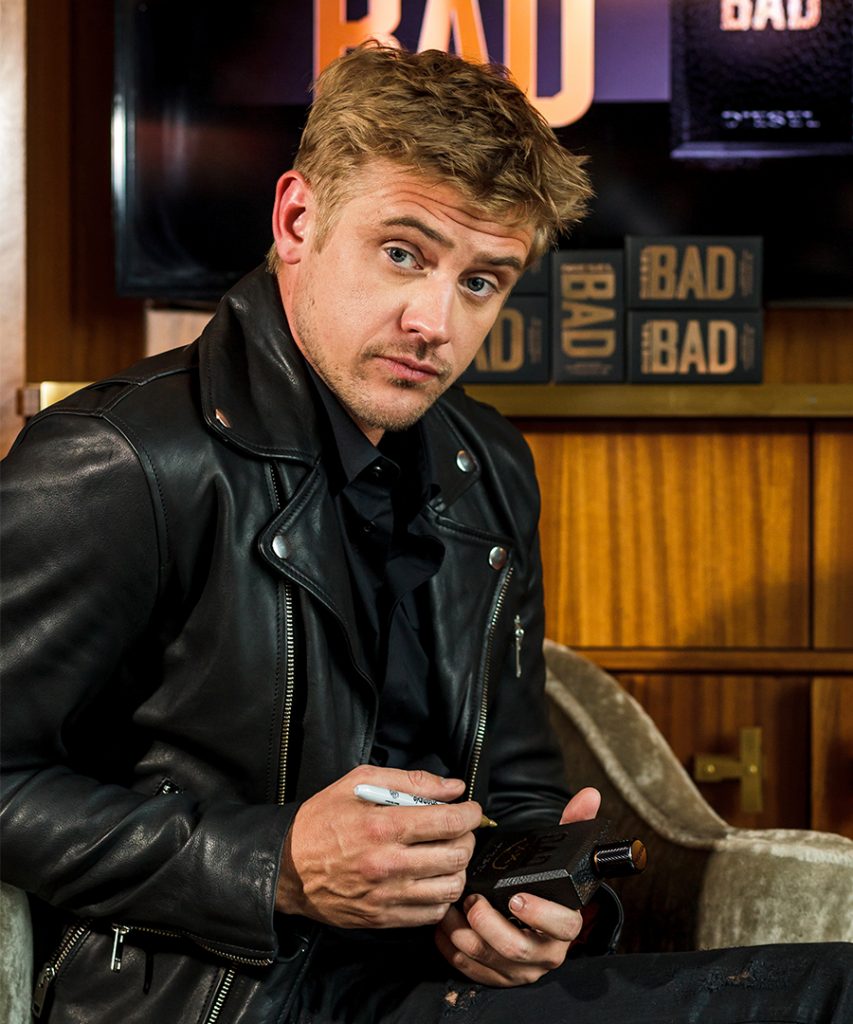 Boyd Holbrook has more or less been in the Hollywood game for just under ten years. And with a considerable number of titles already under his belt (including Narcos and soon, The Predator) the actor and Kentucky native can now check another career “win” off his list: starring in a fragrance campaign.

Holbrook is the new face of Diesel BAD, the brand’s latest fragrance, meant to smell part “daring,” part “sophisticated” and, of course, a bit “bad” as well. In the campaign—which features a video shot and directed by Australian director Andrew Dominik (Killing Them Softly)—Holbrook plays into the role of “bad boy,” something he’s not unused to doing. Basically, the match was kismet.

On the heels of this exciting partnership we spoke with the actor about the next steps in his career, the roles that you’re most likely to recognize him from, and what it means to play the bad guy. Below, meet our new favorite bad boy: Boyd Holbrook.

The scent’s name, Bad, carries a certain weight to it. What does that word mean to you?

James Dean was considered a rebel or a “bad boy,” but in actuality he’s not. He was just a very fierce, determined artist who was unapologetic and I think to do anything you have to have that attitude.

What does this collaboration mean to you career-wise?

Diesel is a brand that I genuinely like and have sort of admired—it’s one of the cooler brands out there. I had a little bit of familiarity because of doing modeling in the past, so I kind of knew what I was getting into, but back then I would’ve never had this opportunity. We happened to wrap shooting this on Christmas Eve so Diesel flew my mom and my sister out to Barcelona. That energy expands itself—they didn’t have to do that, my mom and my sister had never been to Europe. I had a ball.

So it’s safe to say that felt like a big step, I’m sure.

Yeah, we all want to confirm the value in our lives. But it’s also good not to take yourself so seriously.

In terms of the recent projects you’ve done—Narcos, The Free World, Logan—and the ones you have coming up—Boomtown, The Predator—what would you say about the kinds of projects and characters you take on?

My gratification is that I can be a little bit of an anthropologist. I consume copious amounts of information in very short amounts of time, like in The Free World, I played a white guy that converted to Islam in prison. First of all, I’m not after being famous or collecting a check. I’m after seriously taking the responsibility to play another man—whether they’re good or bad you better fucking respect that. I’ve become more humble, but when I make noise it’s going to be very loud. And I would rather strike out, in some sense, than play it safe.

Your characters tend to have this quality about them, too. Would you say you can often connect with them a personal level?

I think you’re lousy if you’re not attempting that. Again, I will go back to the simplicity of portraying another man. That’s for real. It can sound pretentious, or whatever, but I will not dishonor that person if they’re bad or good. I take my job very seriously, and for people who just want to show up and say lines: get out of here, man.

And what happens when these characters start to take on a darker tone, like the one you played in Logan?

I’m a big advocate of studying: I work with Terry Knickerbocker Studio, and during a class a kid said, “I don’t want to play a bad guy, I’m not a bad guy.” And of course he wasn’t. But you have to take yourself out of the equation: the story is the purpose.