Read below an interview Boyd Holbrook gave to Den of Geek on reading The Sandman graphic novel, his character The Corinthian, working opposite Tom Sturridge and more:

Can you recall the scariest nightmare you’ve ever had? Imagine the terrors your dormant mind produced: hulking monsters, terrifying creatures, and unholy shades. Now imagine that those horrors could follow you into the waking world. That is a sensation that Netflix‘s The Sandman soon hopes to capture.

Adapted from Neil Gaiman’s classic comic of the same name, The Sandman is set to depict the journey of its title character The Sandman a.k.a. Morpheus a.k.a. Dream as he tries to get his mystical mission back on track. In addition to The Sandman’s powerful peers like Desire and Death, the series will also introduce one of his most unfortunate creations.

The Corinthian, as played by Boyd Holbrook (Narcos, Hatfields & McCoys), is a literal waking nightmare. Though at first glance he appears to be a relatively normal human being, The Corinthian has a habit of wearing dark impenetrable glasses. What’s behind those black frames? That’s a question best not asked or answered. Den of Geek did, however, ask Holbrook some questions about joining The Sandman universe and what we can expect to see from The Corinthian.

Den of Geek: Were you a big fan of The Sandman before this?

Boyd Holbrook: I became a bigger Sandman fan than ever getting ready for this. It’s such a cool graphic novel. It was the spring of 2020. My wife and I started checking it out. I usually give her stuff when I like it. It’s like, “What do you think about this?” She’s my moral compass. I auditioned and thought it went great. And then I didn’t hear anything for like six months.

That’s got to be murder. How do you handle that?

You know what? I am so used to it at this point; I’ve had so many ups and downs that I’ve unfortunately become very callous and cool with a lot of it. It’s just the way it is. [Once I heard] I got on the phone with Neil Gaiman and [showrunner and executive producer] Allan Heinberg, and we all just started talking, and I was really excited about the character and thought it was such a cool thing to play. At the same time, I was a little concerned about the glasses he wears. Acting is in the eyes, man. But we just had a lot of practical, pragmatic conversations about the entry points of the character—what this guy is, who he is and coming to find out, when reading the comics, that maybe he seemed a little bit more flamboyant there. But what we captured was how he is so successful in getting you to welcome him into your home before you realize you’ve made the mistake of inviting in a serial killer.

What did you do as an actor to compensate for the fact your eyes weren’t there?

I think early on I understood that a trap would be to do more mouth-acting or something like that. I just quickly realized that the focus should be on what he exudes. I acted without worrying about the eyes. Essentially just doing what’s before me and being me, because that’s the only person I can be in the context of the show.

How do you view The Corinthian?

I think he’s a mischievous rascal, who loves sucking everything out of life that he can in terms of stimulation. He literally was a captive prisoner who’s now out in society and able to run amok because there are no consequences for him. So it’s really embracing that, as an actor, as a person, as a human being, and enjoying that. It’s a ball. It was totally a great experience.

What’s chilling about it is his ability to spread that evil.

Yeah, exactly. The spirit vaporizes into other people—that is really spooky. And getting a sense of enjoyment out of that. Embracing the dark stuff. What’s also interesting is that everyone has dreams and they’re all fragmented, so it’s an element everybody will relate to. As a kid, it’s that element of Freddy Krueger where I didn’t want to fall asleep, because who knows what will happen? This feels like a continuation of that, so it’s really an interesting concept to play with in the world of dreams itself.

How did you find working with Tom Sturridge and interacting with him as Morpheus?

Well, Tom is incredible. I don’t think there could be anybody else who could play the master of dreams. He’s such an amazing and iconic character that’s just built in with this sadness, that I think they really do a good job of walking the line of not making it too heavy and making it a little enjoyable and funny in the show, especially with Matthew the Raven. But we didn’t work together until my very last episode or sequence. I’d constantly see Tom across the room, going to the set covered in his hazmat suit. You know, Covid protocol, which was all so bizarre. I kept asking people around me how it was going, and it was hard to get a read on things because you couldn’t read people and get an understanding of it. It’s such a communal job where you’ve got 100 people, at least, around you at all times, and normally you can pick up on the vibe on set of everything. But with this one, we were all just covered up because of Covid.

What do you think the power of this show is?

It’s something that’s universally relatable, which is The Dreaming. It’s our subconscious and our consciousness, which everyone deals with every day and it’s a vastly endless spiral of thoughts and revelations. Revelations about who we are as humanity. I think that’s the through line in the show, that every audience member is also living two lives when they fall asleep. 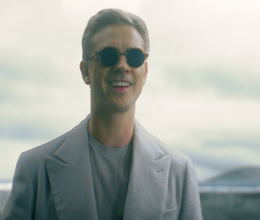 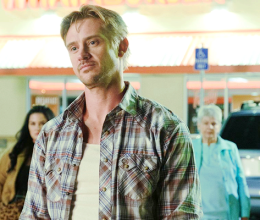 Boyd Holbrook talks about his character in ‘Vengeance’ 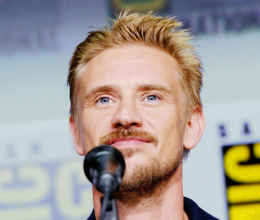